Purpose of the Research Project

This project aims at the realization of optical force technologies for mechanical manipulation (trapping, transportation, positioning, and aligning) of individual nano-objects, such as molecules and quantum dots, in a direct and selective way according to their individual properties, leading to scientific principles of a novel scheme for creating structural order through the manipulation of microscopic substances. To achieve the technologies of manipulating the mechanical motion of individual nano-objects, we develop the design method for optical forces using linear and nonlinear optical responses of various targets exhibiting quantum mechanical properties. Our project will realize novel schemes to create structural order reached only by optical force technologies, e.g., optical sorting and isolation of targets in different quantum resonance conditions, manipulation of crystal morphology and alignment, and manipulation of chemical processes by selective control of molecular diffusion and condensation.

To visualize the achievement of our goal, we will conduct the following three collaborative subprojects: [A] Isolation of particular kinds of nano-objects and their precision arrangement over a macroscopic region, [B] control of interparticle interactions for the creation of hierarchical structures including crystallizations, and [C] control of chemical processes through selective manipulation of molecules. Furthermore, we set four planned studies that are the bases of the above subprojects, i.e., A01: Theories, metrologies, and observations of optical forces for establishing basics of optical manipulation (“basics of optical forces”), A02: advancement of manipulation methods utilizing the microscopic degrees of freedom of matter systems (“creation of optical forces”), A03: single molecular manipulation on the nanometer scale by utilizing localized electric field, and the operation over macroscopic regions (“ultimate scheme of optical forces”), and A04: creation of superstructures and new phenomena by selective control of interparticle interactions (“exploitation of optical forcees”). We will achieve these three subprojects by synergizing the four planned studies.

Researchers from a variety of fields, such as physics, chemistry, and engineering, join this project. One of the characteristics of our project is the challenge of realizing a novel manipulation scheme by integrating methods from different fields. To realize this idea, we manage several “training Dojos” where young researchers can learn methods of different fields, thus strongly promoting collaboration for the subprojects [A], [B), and [C), and building the ability of young researchers.

Scientific principles and technologies realized by this project will lead to the following achievements. (1) Selective motion, induction, sorting, isolation, and spatial mapping of nano-objects are carried out in a noncontact way using light resonant with the transition energy of the matter. Control and observation of spatial alignment of nano-objects on the molecular scale enable technologies for unconventional metrology, screening, and visualization that cannot be performed using existing methods. (2) Control of interparticle interactions by manipulating the local density and orientation of particles in high-concentration solution enables the creation of artificial hierarchical structures by manipulating crystallization and self-assembly of nanoparticles. (3) Control of the density gradient and alignment of particular kinds of particles is made possible by manipulating their local diffusion and density using optical forces. This will enable unconventional schemes for studying and controlling chemical processes through mechanical manipulation of molecules, novel types of position-selective molecular sensing, and technologies to dramatically improve efficiencies of chemical reactions. 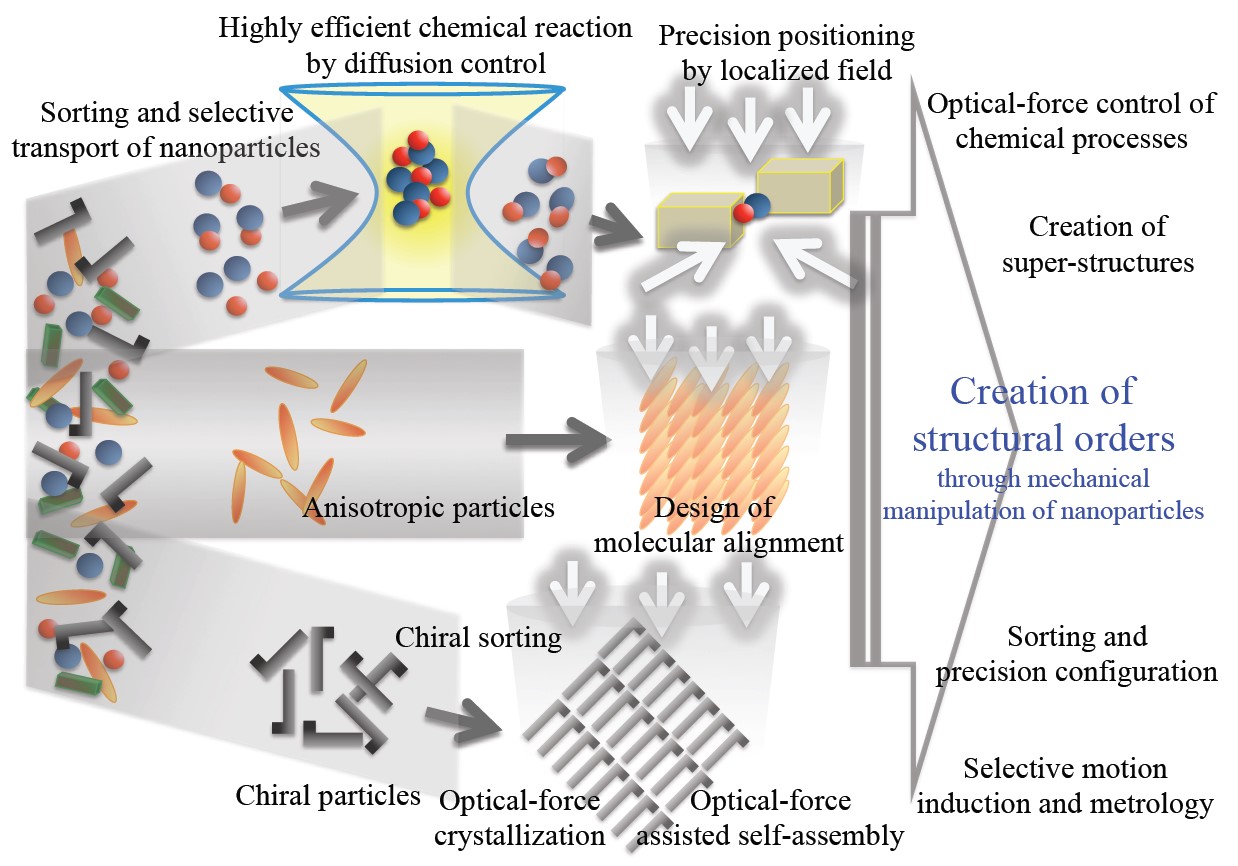